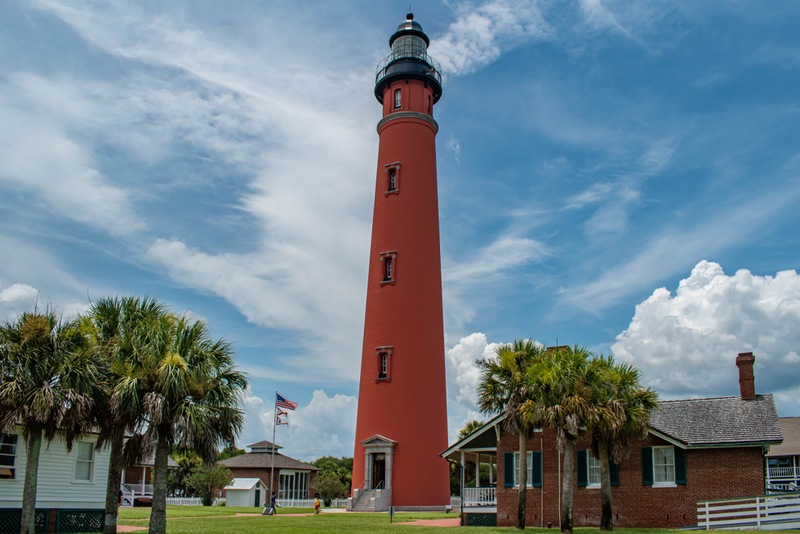 People love watching the six beams of light emitted from the top of the Ponce Inlet Lighthouse slowly rotate round and round at night. When seen from a distance, these six beams produce six 1.5 second flashes of light in 15 seconds followed by a 15-second eclipse (or period without flashes). Most observers are unaware that this repetitive 30-second flash pattern is unique to the Ponce Inlet Lighthouse. Even fewer understand how a single 1000 watt light bulb located in the lantern room can produce the concentrated beams of light that pierce the darkness more than 18 miles out to sea.

The light or "beacon" that is projected out from the top of the Ponce Inlet Lighthouse is produced by a Fresnel lens, a special kind of optic that has been used in lighthouses around the world since the early nineteenth-century. They were invented by a French physicist named Augustin-Jean Fresnel in 1821 and completely revolutionized lighthouse technology. Unlike earlier reflector-based optics that utilized only 50% of the light produced by their oil lamps, Fresnel lenses could focus nearly 98% of the rays produced by a central light source into a bright beam of concentrated light that could be seen from more than twenty miles out to sea.

A Fresnel lens creates this bright beam of light using glass prisms set in metal frame. These prisms change the direction that light is traveling in so all the light exits the lens in same direction. The prisms do this by refracting (or bending) light and reflecting it as well. Refraction is the scientific word that is used to describe how light is bent as it enters or exits a dense transparent material (or medium) like glass at angle other than 90 degrees. Reflection occurs when light bounces off the surface of smooth, shiny material like metal, glass, or water. Reflection can occur on both the interior and exterior surface of transparent object. The reflection of mountain range on the surface of a crystal clear alpine lake and the reflection of fish on the underside of the lakes surface are both great examples of external and internal reflection in action.

Many lighthouses are still equipped with their historic Fresnel lenses while others have had their original optic removed and new modern-day electric beacons installed in their stead. Although introduced more than 200 years ago during the Industrial Revolution, Fresnel lens technology is still in use today. It can be found in the headlights of your car, in surgical lasers, in even spacecraft.