Located two miles north of the lighthouse and museum in Ponce Inlet, Timucuan Oaks Garden is eight pristine acres of 'Old Florida' at its finest.

In 2002, the Town of Ponce Inlet’s Land Acquisition Advisory Committee recognized the environmental sensitivity of this property and named it a priority candidate for preservation. Now known as Timucuan Oaks Garden, the park was acquired by the Town in 2004 with assistance from the Trust for Public Land and funding from the Florida Communities Trust.

An archaeological survey completed in 2007 discovered what had previously been thought to be a large sand dune extending across the property was actually a prehistoric a midden dating back to approximately 800 AD. A midden is ancient mound of shells, bones, pottery, and other artifacts deposited by the area’s original Native American inhabitants over hundreds of years. 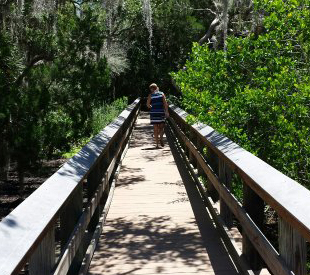 The park is named in honor of the Timucuan Indians; the Native American people who inhabited much of Northeast and North Central Florida from approximately 3,000 BC until the arrival of the Spanish in the Sixteenth Century. The park’s tranquil English-themed garden was designed in memory of the late Constance D. Hunter, a preeminent resident who was from England and whose generosity to the Town left a lasting legacy. You will find the entrance to the nature trail leading into the marine hammock just past the garden. This heavily canopied path winds past the prehistoric shell mound to an elevated boardwalk over the marsh. Stop at the gazebo to enjoy bird watching before heading to Daggett Creek, where you can fish or launch a canoe. Please enjoy the park, leaving only your footprints behind when you leave.