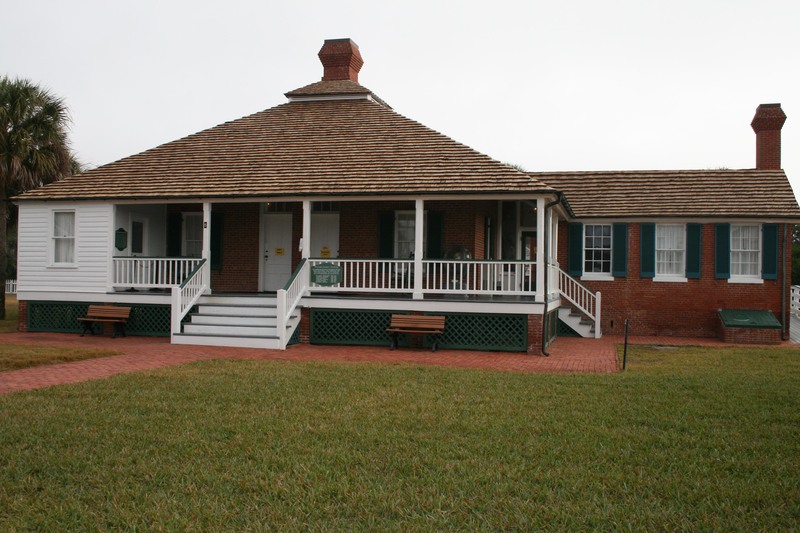 The Ponce De Leon Inlet Lighthouse Preservation Association is pleased to announce the restoration of the principal keeper dwelling’s roof thanks to a generous grant provided by the Florida Lighthouse Association.

With the exception of the copper-topped lantern room and the oil storage building, all of the Ponce De Leon (originally Mosquito) Inlet Light Station’s historic structures featured wood shingle (i.e. “shake”) roofs. Wood shingles are thin, tapered pieces of wood that are fastened to roofs in rows using an off-set overlapping pattern. The terms “shake” and “shingle” are often used interchangeably although shingles are technically sawn into shape whereas shakes are split directly from a log. Regardless of how they were produced, shingles /shakes were historically made from hardy, insect, and rot-resistant species of wood including redwood, cedar, cypress, and heart pine. Modern shingles/shakes are often pressure-treated (PT) with liquid preservatives to increase their longevity.

Shake roofs are strong, reliable, and generally problem-free. A well-constructed shake roof can last for many decades, especially when it is maintained.  The roofs of the three keeper dwellings and woodshed-privies were well-cared for by the US Lighthouse Service (originally the US Light-House Establishment) and its resident keepers. This fact is well-documented in historic records that discuss repairs to the station’s wood-shake roofs on numerous occasions from 1887 through the 1930s. 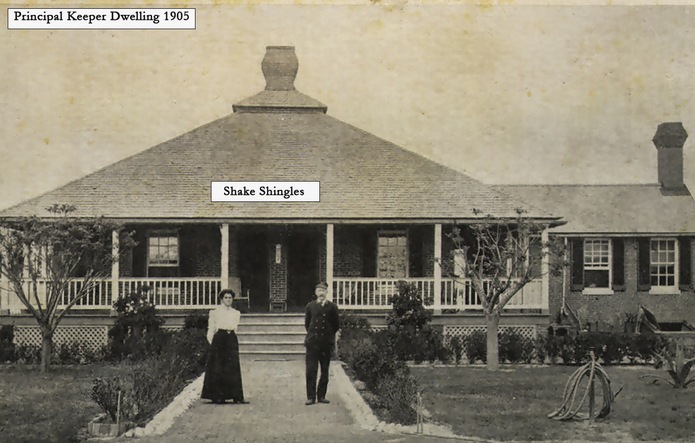 The US Lighthouse Service was officially abolished in 1939 and responsibility for the nation’s aids to the navigation system (including the Ponce Inlet Light Station) was transferred to the US Coast Guard. Recognizing the need for experienced servicemen to perform these newly assigned duties, the Coast Guard offered US Lighthouse Service personnel the opportunity to join the military rather than retire. Many former keepers chose this option and continued to serve as enlisted Coast Guardsmen and officers.

The Ponce de Leon Inlet Light Station was well-cared-for during its first decade as a US Coast Guard facility. However, this began to change in 1953 when the tower’s beacon was fully-automated and the need for resident lighthouse keepers no longer existed. After this date, the station stood essentially abandoned save for occasional visits by Coast Guard personnel.

The departure of resident keepers exacted a heavy toll on the lighthouse and its surrounding structures. The 1950s and 60s witnessed the once meticulously cared for buildings and grounds slowly deteriorate due to the lack of proper maintenance and random acts of vandalism. Local residents at the time told stories of teenagers climbing the lighthouse and launching pieces of iron torn from the tower’s gallery deck railing onto the roofs of the first and second assistant keepers’ dwellings, of bricks being thrown through windows, vagrants taking up residence inside the station’s various buildings, and of fires being lit in the tower’s weight well. One of the most extreme examples of vandalism involved the oil storage building which was set on fire in order to steal the copper roof panels in 1970.

The physical decline of the light station continued until 1972 when it was declared surplus property by the federal government and acquired by the Town of Ponce Inlet. Responsibility for the light station was immediately passed to the Ponce De Leon Inlet Lighthouse Preservation Association which made repairing the damaged roofs of the keeper dwellings one of its first items of business.  The roofs of the first and second assistant keepers’ dwellings were initially restored in 1973 with pressure-treated cedar shingles, and again in 2000 using PT pine.

The roof of the principal keeper’s dwelling retained its original wood shingles until 1995 when it was reroofed with asphalt shingles. The Preservation Association’s decision to use modern materials was most likely a financial one. The organization had just completed construction of the Ayres Davies Lens Exhibit Building and may have lacked the necessary funds to re-roof the principal keeper’s dwelling with wood shakes due to the higher cost. These asphalt shingles reached the end of their serviceable life and needed to be replaced.

Restoration of the principal keeper dwelling roof began in January 2021. The old asphalt shingles were removed and pressure-treated western red cedar shingles installed in their place. Copper flashing and drip edge were also be used to replicate the building’s original 1887 appearance and material composition. Deteriorated wood roofing elements were repaired using reclaimed lumber dating to the late 1800s/early 1900s as needed. This important restoration job was completed by Walker Roofing, a locally-owned company that the Preservation Association has worked with on several occasions in the past.

This important restoration project had originally been scheduled for the summer of 2020, however, the financial impact of COVID-19 forced the Association to postpone the work until much later.  The fact that the Association was able to start the project in January 2021 was only made possible thanks to a $58,050 grant from the Florida Lighthouse Association (FLA). This generous gift was provided to the Ponce Inlet Lighthouse and Museum in November 2020 through the FLA’s Gene Oaks Lighthouse Preservation Grant program.

The Florida Lighthouse Association is a nonprofit organization dedicated to the preservation of Florida’s 29 surviving historic lighthouses. FLA members include delegates from lighthouses around the state, historic preservationists, educators, lighthouse enthusiasts, and more. The mission of the Florida Lighthouse Association is to “preserve, restore, protect and defend Florida's lighthouse towers, along with their material culture, buildings, artifacts, and records to assure that the magic of Florida's lighthouses and lighthouse keepers will be available for the enjoyment and understanding of future generations.”

The Gene Oaks Lighthouse Grant program is funded by FLA’s Visit Our Lights specialty license plate. This unique tag features a beautiful rendering of the Hillsboro Lighthouse at sunrise and is available at most Florida DMV offices and licensed service locations. In addition to its eye-catching design, all proceeds realized from the sale of the Visit Our Lights license plate (90% of the $25 annual specialty plate fee) are used to fund the preservation and restoration of Florida’s historic light stations. The Ponce Inlet Lighthouse and Museum encourages its members to consider purchasing a Visit Our Lights license plate when they renew their tags to help fund the FLA’s efforts to preserve Florida’s historic beacons. 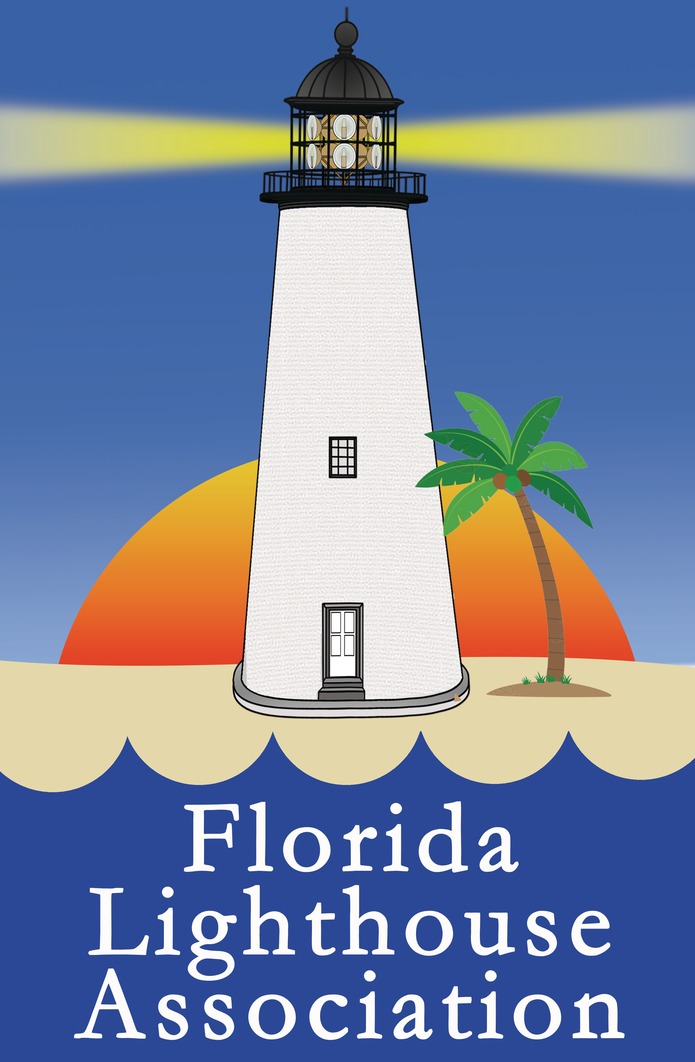