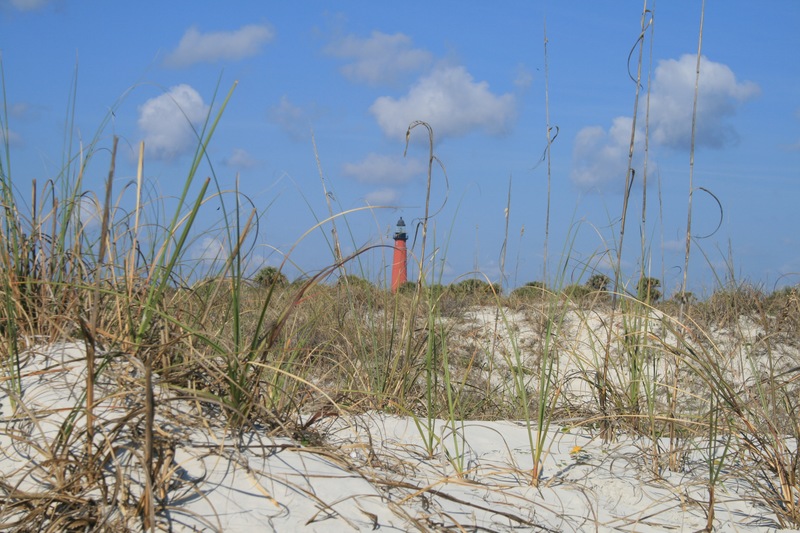 Located on the southern tip of a 47-mile-long barrier island, the Town of Ponce Inlet is home to several public parks and pristine ecological areas where visitors can still experience wild Florida in all its glory.  Untouched by modern development, these wild parcels are home to a host of flora and fauna species that are native to the Sunshine State. Visitors can stroll down well-maintained paths, enjoy the natural scenery, and experience a true cross-section of Florida’s diverse coastal environment as they explore natural hardwood hammocks, tidal wetlands, and unspoiled dune systems.  Read on to discover the many natural wonders that Ponce Inlet has to offer and learn how these wild areas are being preserved as public spaces for future generations to enjoy.

The Ponce Inlet Lighthouse has a nature walk that winds through a coastal hammock composed of twisted live oaks, thick palmettos, soaring palms, and other Florida plant species.  A Coastal Hammock is a special kind of salt-tolerant forest that commonly grows near marine shorelines or along the landward side of coastal dune systems.  Coastal hammocks are usually found on low-lying hills or along elevated land spurs surrounded by salt marsh or wetlands.

Take a walk on the nature trail behind the light station during your tour of the lighthouse and museum. You will discover a wide variety of native flora and fauna including many that early Florida pioneers would have relied on for food. Take time to pause and listen during your journey. Imagine what the lighthouse keepers might have heard or seen in the late 1800s. Try to identify as many native species as you can; including Live Oaks, Cabbage/Sabal palm, Yaupon Holly, Wax Myrtle, Southern Bayberry, Florida Lantana, and Simpson’s Stoppers.  Enjoy the beautiful sound of songbirds as they watch you from elevated perches high overhead or from concealed locations in the brush below. You may even encounter a few of the forest’s four-legged residents as you meander along the hammock’s twisting paths such as raccoons, squirrels, opossum, armadillos, rabbits, foxes, and the state-protected Gopher Tortoise.

The Ponce De Leon Inlet Lighthouse Preservation Association has actively worked to preserve and disseminate the maritime and social history of the Ponce Inlet Light Station since 1972. In addition to preserving the station’s historic structures, the Association has also worked to safeguard as much of the wild landscape surrounding the light station as possible.  By protecting the native flora and fauna, the organization also preserves a small slice of the natural coastal environment that the lighthouse keepers called home.

Those longing for more opportunities to explore Ponce Inlet’s wild side should stop by one of the area’s local parks after completing their tour of the lighthouse and museum.  Ponce Inlet is home to three exceptional public parks that provide easy access to salt marshes, coastal hammocks, and well-preserved dune systems.

Lighthouse Point Park is a coastal sanctuary operated by the Volusia County Parks and Recreation Department. The park is located less than a ¼ mile from the base of the lighthouse where the Halifax and Indian Rivers meet the sea. This unique recreational area encompasses more than 52 acres of unspoiled coastline that has been left in its natural state for all to enjoy. Visitors will discover a land rich in natural beauty instead of the modern high-rise condominiums, resorts hotels, and privately owned homes commonly found on most stretches of the World’s Most Famous Beach.

Lighthouse Point Park encompasses an extensive system of sand dunes where you can find numerous examples of native flora including saw palmetto, sea oats, sea grapes, and many varieties of seagrass. These salt-tolerant species collectively work to fight erosion and help hold the sand dunes together. Grasses like sea oats, saltgrass, beach sunflower, and beach morning glory can be found in abundance here. You can take part in the preservation of the dunes and the natural hammock by not walking on the dunes and parking or driving on designated areas while visiting the beaches. Wildlife also abounds throughout this unspoiled preserve. Commonly seen coastal critters include raccoons, possums, skunks, armadillos, shorebirds, gopher tortoises, and birds of prey. Dolphins and manatees can often be seen swimming in the waters of the inlet and sea turtle sightings from the jetty are common.

Lighthouse Point Park offers a wealth of outdoor opportunities for young and old alike. Park guests can dig their toes into the white sands of the beach; grill up some tasty hotdogs and hamburgers; host a family get-together or party at one of the site’s covered pavilions; play in the surf; wander the inlet’s extensive shoreline; explore a pristine coastal dune system from elevated boardwalks, and venture out onto the park’s 1,000-foot paved fishing jetty. Lighthouse Point Park is also one of the few pet-friendly beaches in Volusia County. Dogs are welcome but must remain on a leash and be picked up after at all times.

Swimming is allowed both on the beach and along the river although caution must be exercised at all times due to swift currents and undertows.

Lighthouse Point Park is open daily to the public from sunrise to sunset. Daily entrance fees are $10 per vehicle. Those wishing to visit for more than a day can choose to purchase an annual Volusia County Beach Pass for only $20.

Ponce Preserve Municipal Park is located 2.5 miles north of the lighthouse on South Peninsula Drive. This unique slice of natural Florida stretches across the entire width of the barrier island from the Halifax River to the Atlantic Ocean. Protecting a cross-section of pristine barrier island habitat, the 41-acre park is located a stone’s throw from the beach where auto racing was born. Ponce Preserve features two nature-themed playgrounds, a covered pavilion with picnic tables, a restroom facility, elevated boardwalks, hiking trails, observation towers, and the Green Mound State Archaeological Site.

A mound or “midden” is essentially a prehistoric dump site composed of shells, bones, pottery shards, and other artifacts that were cast aside by the Timucuan Indians over many generations. The composition of the midden caused many pre-Columbian artifacts to be preserved over the ages. Archaeological surveys of the mound revealed a vertical chronology of the Native Americans who constructed it between 800 and 1600 CE. In fact, the very formation of the midden signified the shift from a nomadic to a sedentary lifestyle as the mound was created from the shellfish diet that allowed the population to flourish in the area for hundreds of years.

Green Mound once rose more than 50 feet above the surrounding landscape but erosion and the short-sighted removal of material to construct a road in 1922 has since reduced the mound’s original height to 30 feet. Laws are now in place to protect these important historic sites for future generations.

The terrain surrounding the Green Mound State Archaeological Site is varied, ranging from ocean dunes, terraced palmetto patches, and maritime hammocks to wetlands adjacent to the Halifax River. You’ll find many of our native plants in the Preserve including Florida lantana, southern red cedar, cabbage palms, Simpson’s stoppers, and oak trees. At the base of the Green Mound is a live oak estimated to be more than 350 years old. The Preserve has been added to the East Section of the Great Florida Birding Trail and is an excellent site for bird watching.

The park offers a variety of hiking opportunities. You can climb to the summit of the shell mound, venture out on a 1/3 mile boardwalk that extends out to the Halifax River, walk through a natural hardwood hammock and palmetto scrub, or explore the coastal dune system that parallels the beach.  The park’s varied topography provides a nice sense of balance for hikers of all abilities. Half the trails feature steep climbs and dips while the other half is entirely wheelchair accessible.

Most of the park’s features and amenities can be accessed directly from the parking lot on South Peninsula Drive including the covered pavilion, restroom building, kayak and canoe launches, river boardwalk, Green Mound, and most trailheads.  The wildlife observation tower and second playground can be found a short distance away along a well-maintained trail. The boardwalk linking the park to the beach is easily accessed from the Preserve’s second parking lot on South Atlantic Avenue.

Funding for Preserve’s development was provided by the Ponce de Leon Inlet & Port District of Volusia County and the Florida Inland Navigation District. The Garden Club of Ponce Inlet provided the benches throughout the park and landscaping at the entrance island. The Florida Recreation Development Assistance Program and Volusia ECHO grants funded the construction of the recreational facilities.

Timucuan Oaks Garden is located 2 miles north of the lighthouse on South Peninsula Drive and encompasses eight pristine acres of 'Old Florida' at its finest.

The park was created in 2002 when the Ponce Inlet Land Acquisition Advisory Committee recognized the environmental sensitivity of the property and named it a priority candidate for preservation. Now known as Timucuan Oaks Garden, the park was acquired by the Town of Ponce Inlet in 2004 with assistance from the Trust for Public Land and funding from the Florida Communities Trust.

An archaeological survey completed in 2007 discovered what had previously been thought to be a large sand dune extending across the property was actually a prehistoric shell midden dating back to approximately 800 AD. A midden is an ancient mound of shells, bones, pottery, and other artifacts deposited by the area’s original Native American inhabitants over hundreds of years.

The park is named in honor of the Timucuan Indians; the Native American people who inhabited much of Northeast and North Central Florida from approximately 3,000 BC until the arrival of the Spanish in the Sixteenth Century. The park’s tranquil English-themed garden was designed in memory of the late Constance D. Hunter, a preeminent resident who was from England and whose generosity to the Town left a lasting legacy. You will find the entrance to the nature trail leading into the marine hammock just past the garden. This heavily canopied path winds past the prehistoric shell mound to an elevated boardwalk over the marsh. Stop at the gazebo to enjoy bird watching before heading to Daggett Creek, where you can fish or launch a canoe. Please enjoy the park, leaving only your footprints behind when you leave.

Williams, A J. “Native Plants for Coastal Dune Restoration: What, When, and How for Florida.” USDA Natural Resources Conservation Service, USDA.gov, 31 Aug. 2021, www.nrcs.usda.gov/Internet/FSE_DOCUMENTS/nrcs141p2_014913.pdf.