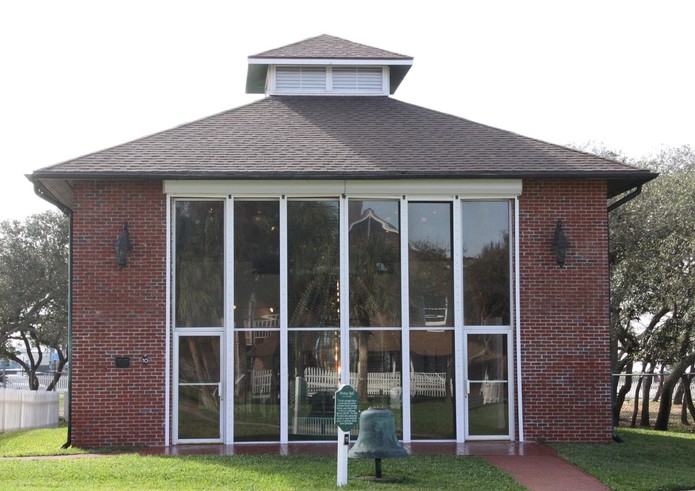 Although this building was constructed in 1994-1995, its history really goes back to 1973.  The Ponce de Leon Inlet Lighthouse Preservation Association had been established the previous year to manage the lighthouse for the town.  This all-volunteer organization was led by its president, Ann Caneer, who immediately began efforts to have the 1933 rotating Fresnel lens returned to its home at the lighthouse.  To protect it from vandals, this lens had been removed by the Coast Guard in 1970 and sent to the Coast Guard Museum for display.  Ann's efforts were successful, and the lens came back to Ponce Inlet in 1973.  Preservation Association staff had to learn how to reassemble this artifact and preserve it in the best way possible.  Eventually, the volunteers completely revived the lost arts of Fresnel lens design, restoration, and preservation. 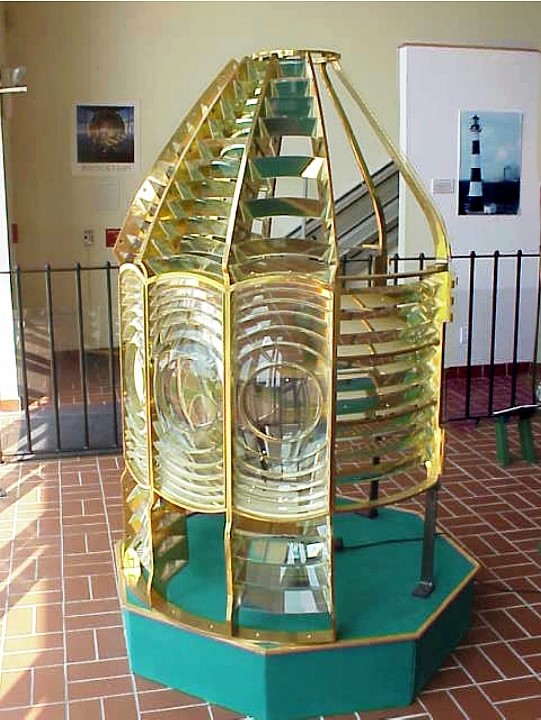 Ponce Inlet third order Lens on exhibit before restoration to service in the tower.
The Coast Guard was so impressed by this work that in 1992, the Coast Guard curator requested that the Cape Canaveral first order rotating lens be sent to Ponce Inlet for restoration and display. The condition of that lens had deteriorated over the years and vibrations from nearby rocket launches at the Cape had added to the problems. The lens arrived at Ponce Inlet in 1993, and rooms in the principal keeper dwelling were designated for the storage and repair of the artifact. 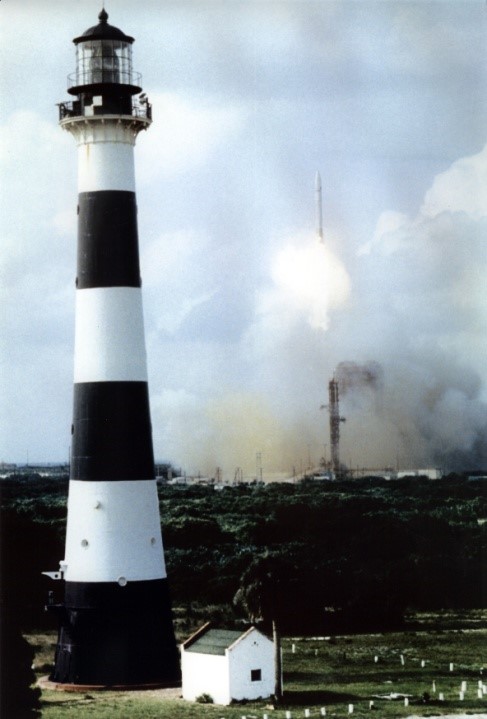 Vibrations from nearby rocket launches damaged the Cape Canaveral lens. 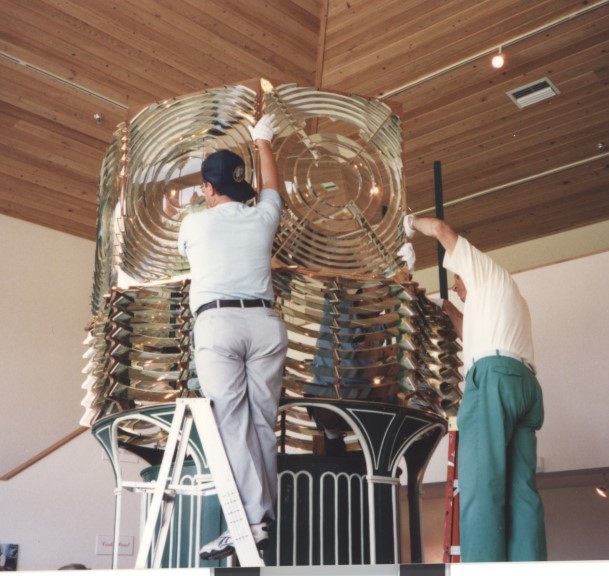 The Canaveral lens was restored at Ponce Inlet in the early 1990s and put on display in the new Ayres Davis Lens Exhibit Building. 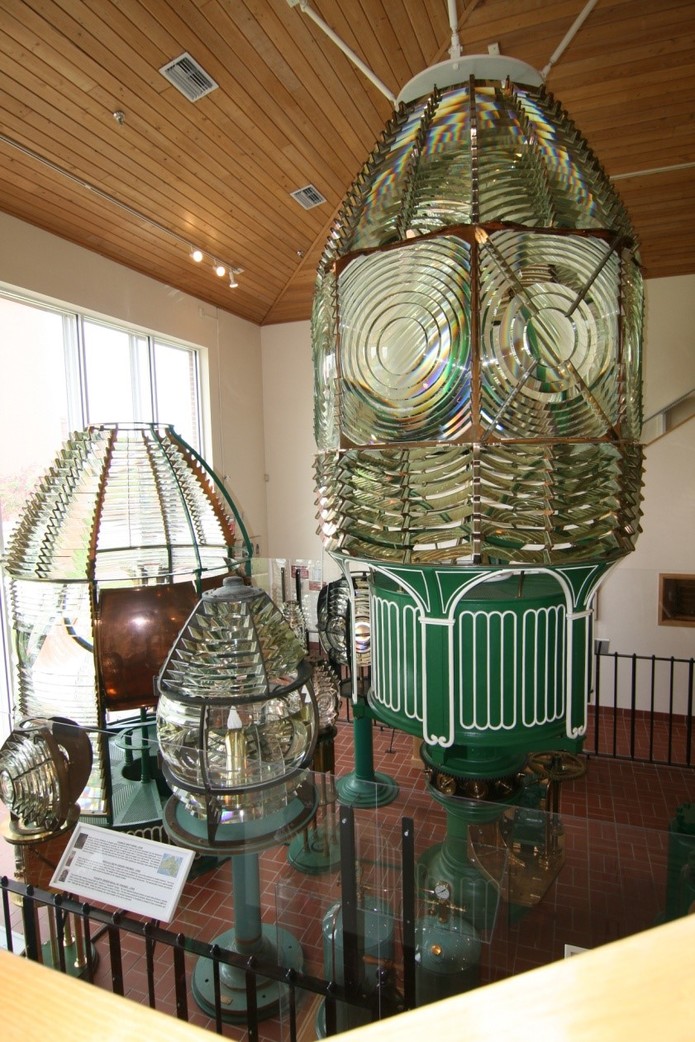 Display space for this object had to be created, and the answer was to construct a lens exhibit hall which was specially designed to carry the weight of huge lighthouse optics and had additional ceiling supports (similar to a lighthouse lantern room "spider") for the Canaveral lens.  This building was named for Ayres Davies, the first mayor of the Town of Ponce Inlet and a founding member of the Preservation Association.  The Cape Canaveral lens was proudly installed there in 1995.  Since that time, the lens collection has expanded to include many examples of Fresnel lens technology including historic lighthouse lenses in the Fresnel and Chance Brothers styles, buoy and harbor lights, ship lanterns, hand lanterns, and post lanterns.  Most of these have undergone conservation and restoration by museum staff and volunteers.

Ann Caneer had also been seeking the whereabouts and return of the first order fixed Fresnel lens that was the original optic when the lighthouse was activated in 1887.  This lens was removed in 1933 when the lighthouse was electrified and the rotating third order lens was installed.  The first order lens was packed and shipped to the Lighthouse Service supply depot at Staten Island, New York.  Eventually, all records of the lens' location disappeared, and some even thought the lens had been lost at sea.

Eventually, in 1996, the lens was located.  It lay in pieces in the basement of a building at Mystic Seaport in Connecticut.  Apparently, the lens had been sent there in years past for possible display and was eventually forgotten. Ann quickly petitioned the Coast Guard for return of the lens and for permission to restore it.  The restoration work required was extensive, but the Ponce Inlet restoration team was able to complete it and put it on display in the lens building by 2003. 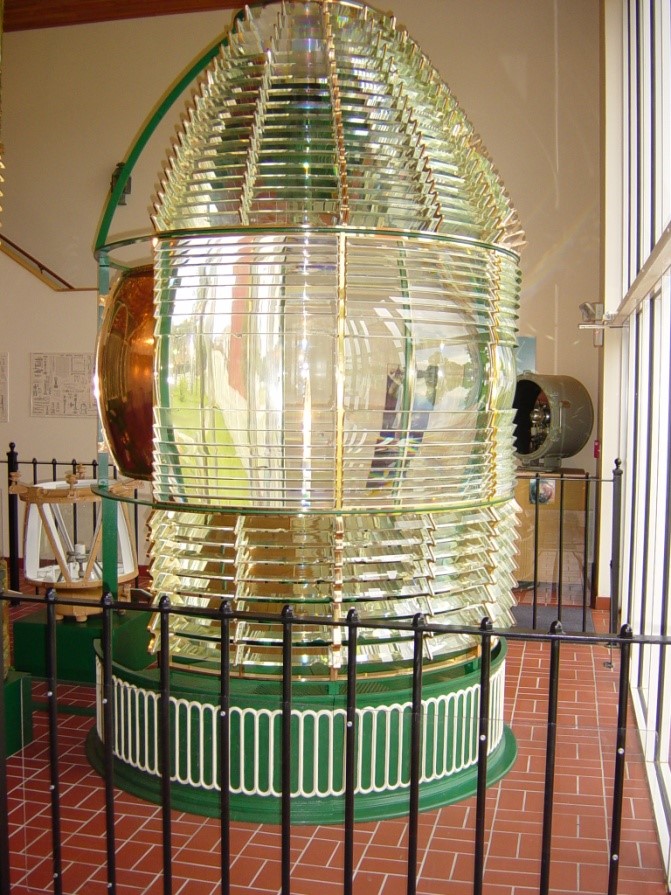 The team was also working on a more complete restoration of the original third order rotating lens with the vision of taking it off exhibit and returning it to service in the tower.  This, too, was accomplished, and the lens was placed in the tower in April of 2004.

Today, visitors to the lens building will discover the history of lighthouse illumination, and see the truly stunning collection of lenses and lanterns, plus a number of important artifacts from the early years of the Light-House Establishment as well as the later Lighthouse Service. 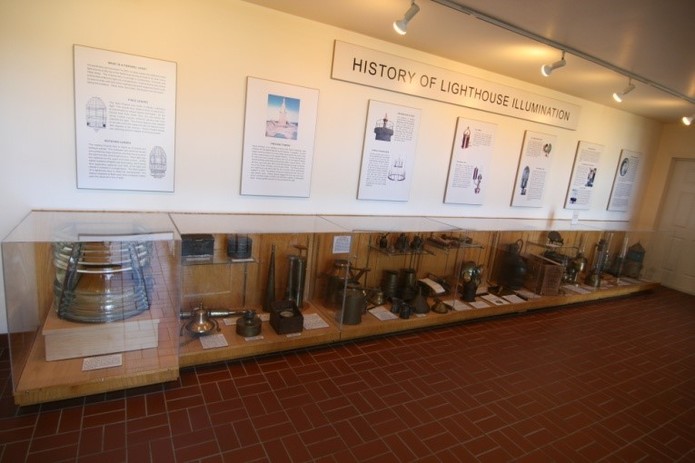