About Us
About Us
Home / About Us / A Celebrated Historic Tradition

The Ponce de Leon Inlet Lighthouse Preservation Association is one of the few self-sufficient nonprofit historic preservation groups in the region. Limited state funding is sought when available.

The Ponce De Leon Inlet Lighthouse Preservation Association strives to accomplish its mission to preserve and disseminate the maritime and social history of the light station in a manner keeping with the highest expectations of its members, supporters, and community. The Association produces an annual president's report at the end of each fiscal year outlining its numerous activities, accomplishments, and ongoing operations. 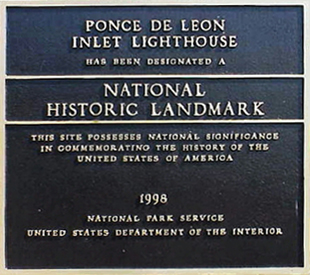 The Ponce de Leon Inlet Light Station was officially declared a National Historic Landmark in 1998. Only 11 other towers share this prestigious designation out of the estimated 760 surviving lighthouses in the country.

National Historic Landmarks (NHLs) are historic properties that illustrate the heritage of the United States in a significant and meaningful way. The 2,618 NHLs found in the U.S. today come in many forms including historic buildings, sites, structures, objects, and districts. The Secretary of the Interior designates these places as exceptional because of their abilities to illustrate U.S. heritage.

Achieving National Historic Landmark status is no easy task. Properties must first meet the Department of the Interior’s stringent NHL qualification criteria to even qualify for nomination. Those that do must then have a National Historic Landmark Study completed by their nominating organization. Landmark studies are prepared on National Register nomination forms and, ordinarily, are part of a thematic study that evaluates the comparative significance of a large body of resources. The National Park Service includes lighthouses and other aids to navigation in its theme study The Maritime Heritage of the United States.

National Historic Landmark studies are generally prepared by the nominating organization under cooperative agreements with other governmental entities, private organizations, or experts in the field. The Ponce de Leon Inlet Light Station’s NHL Study was written by renowned lighthouse historian Ralph Eshelman with assistance from Preservation Association staff and submitted to the Department of the Interior for review in 1997.  The Ponce de Leon Inlet Light Station was declared a National Historic Landmark by the Secretary of the Interior the following year. The Association invites you to read the completed study by following the link below.