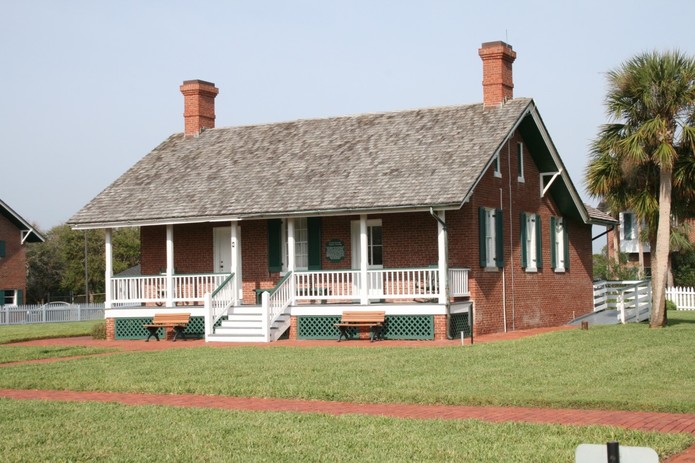 The homes for both the first and second assistant keeper are identical and derived from the standard plans drawn by Peter C. Hains, a former engineer secretary of the Light-House Board and a man with a lengthy career as a designer and engineer. These dwellings are constructed of brick and heart pine, and have front and back porches. The brick cistern for each is located behind the house. Both dwellings contain a living room, a kitchen and pantry, a large bedroom, and a small bedroom. The windows had copper screens and wooden storm shutters. At various times in their history, the houses had screens on the porches, no doubt enabling family members to sleep outside on hot nights. And both houses have two front doors – one at the living room and one opening into the large bedroom. The windows in the living room front doors of both houses are not part of the original design and were cut in later by the Preservation Association in the early 1980s. A bedroom front door might seem unusual to us today but was a practical feature at the lighthouse, providing a keeper with a quick way to get to the tower. Each house was connected to the tower by a battery-operated call bell apparatus, enabling a keeper on duty to easily summon the other keepers for help in an emergency.

In 1921, bathrooms with indoor plumbing were added to the back porch of each assistant keeper dwelling and to the north side porch of the principal keeper's house. These bathrooms were the Lighthouse Service's response to the growing Progressive Movement in the US, a movement which inspired, among other social programs, better sanitation. The assistant keeper bathrooms were removed during 1993 when handicap access ramps were installed.

Another important upgrade was made to all the keeper dwellings in 1923 with the installation of knob and tube wiring and a Fairbanks Morse Light Plant which provided electricity to all the houses. The Fairbanks Morse generator could run on either kerosene or gasoline, but gasoline provided the best and most efficient power while the kerosene was shown to foul the engine.

That same year, the roof of the second assistant dwelling caught fire. The cause may have been a beam of sunlight directed through a prism in the tower's Fresnel lens. During the day, white muslin curtains were hung in the lantern room to protect the lens and prevent prism-induced fires from starting, but from time to time things did not go as planned and grass fires or roof shingle fires could ignite.

In 1924, the second assistant dwelling was struck by lightning, which blew a hole in the roof. Lightning strikes were not uncommon at the light station, and the tower and other buildings had special lightning protection systems designed by the Light-House Establishment. The system consisted of platinum-tipped lightning rods attached to the chimneys or roof and connected by means of a long copper strap to a cast-iron pipe sunk into the ground nearby. The pipe, nearly six feet in length, was buried in sand and filled with burnt coal. Remnants of these early systems can be seen outside the keeper dwellings. 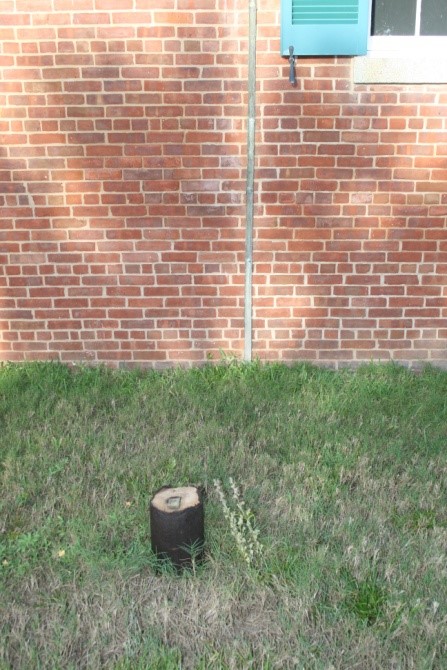 Remains of an original lightning kit.  The copper strap that can be seen on the brick wall would have attached to the pipe which is buried in the ground nearby.

In one respect the second assistant's house differs from that of the first assistant keeper.  In 1963, the Town of Ponce Inlet was able to lease this building from the Coast Guard to use as its town hall.  Shortly after, the wall between the living room and kitchen was removed in order to create a larger meeting space.  When later restorations were carried out, it was decided to retain this change in order to provide a place for indoor activities and for group tours to gather.

The wall between the kitchen and living room was removed in 1963.

Extensive interior restoration work was done on this house by the Preservation Association in 2007, and in August of that year, the living room fireplace was removed while the brickwork was repaired.  On the back of the mantel, museum staff discovered that H. Owens, the original finish carpenter, had signed his name and the date which was 120 years earlier, almost to the day! 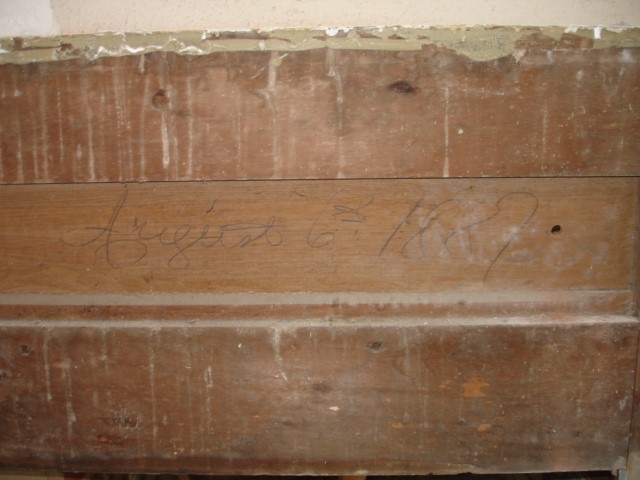 The finish carpenter signed his initials and the date when he completed the fireplace mantel in 1887. 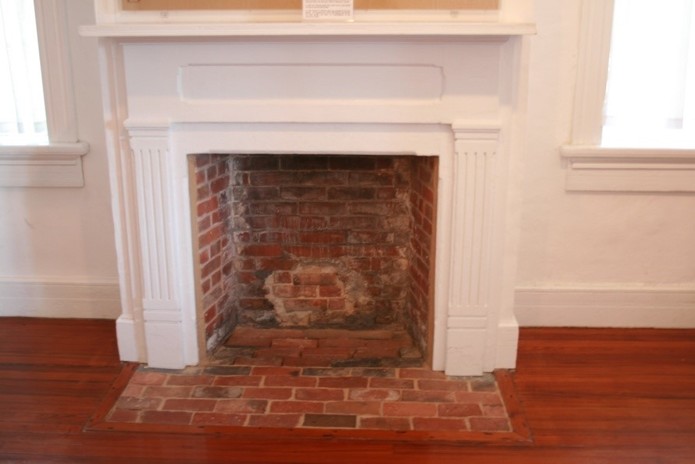 The fireplace after restoration in 2007.

Today, the second assistant's home provides exhibit spaces devoted to the principal keepers and their lives, artifacts unearthed from the historic grounds, Lighthouse Service history, local history including life in the village of Ponce Park which eventually became the Town of Ponce Inlet, and items reflecting the lives of the children who lived at the station. There are videos featuring the life of Gladys Meyer Davis, daughter of the last civilian keeper at the lighthouse, and of the final year of automobile racing on the beach. 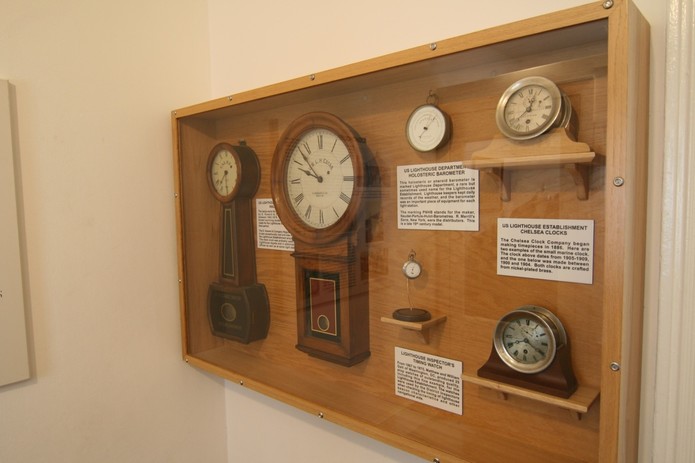 Keepers needed a variety of ways to keep track of time. 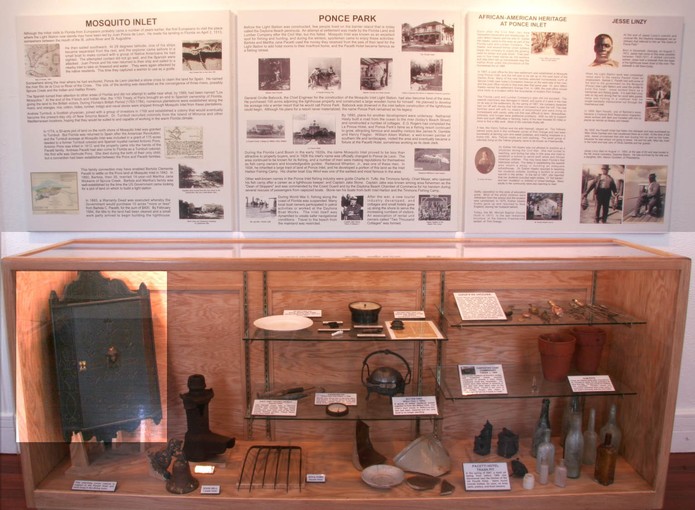 Exhibits about local history are featured in this building. 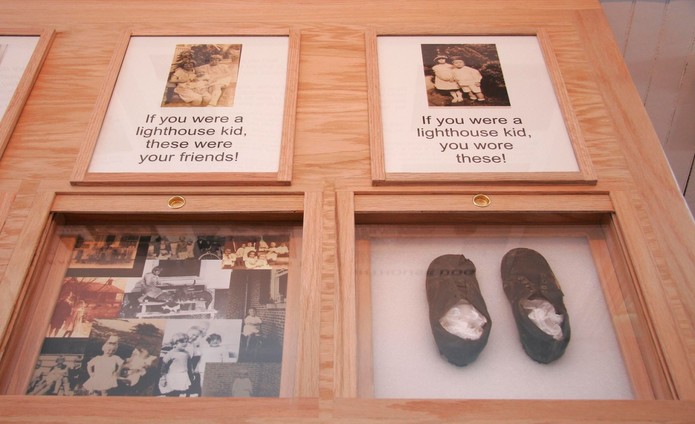 Many items that inform us about the lives of the keepers' children have been found at the light station.