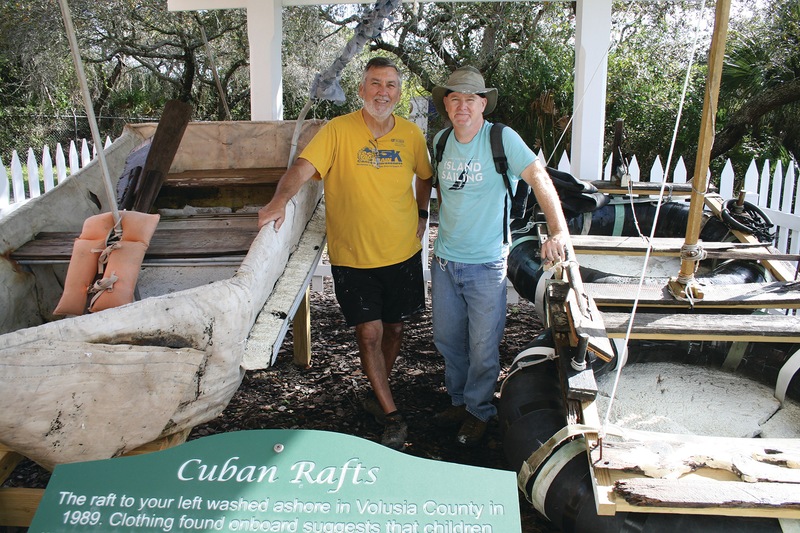 Between 1966 and 1995, anyone who fled Cuba and reached the United States was allowed to pursue residency one year after their arrival.  Many Cubans left the island in small boats and rafts, hoping to reach international waters where they might be picked up by the US Coast Guard and brought the rest of the way to freedom.

A 1995 revision of the Cuban Adjustment Act changed this policy. The United States would no longer admit Cuban refugees found at sea but would admit and allow any refugee who was able to get onto shore or arrive here via a dry land route, such as through Mexico, to qualify for permanent resident status. Refugees intercepted at sea would be returned by the Coast Guard to their place of origin. This came to be known as the "wet foot, dry foot" policy.  With this change, the construction of many refugee rafts became more substantial in anticipation of having to cross under their own power the approximately 90 miles of open water between Cuba and Florida.

President Barack Obama discontinued the wet foot, dry foot policy in 2017, hoping to normalize relations with Cuba. The Trump administration disagreed with these changes and restricted US travel to Cuba as well as immigration by Cubans to the United States. Many refugees were sent to detention centers, especially after the appearance of COVID, as Cuba would no longer allow them to be returned. The Biden administration is making some efforts to reestablish more normal relations with Cuba while voicing concerns about apparent human rights violations and political oppression in that country. Cuban rafts continue to provide a means of escape for those willing to risk it all to live in a democratic country at the present time.

The museum currently has five Cuban refugee rafts in its collection.  Refugee rafts are typically abandoned in the water by either by their occupants or by the Coast Guard and left to float ashore wherever the currents take them, and sometimes they land along the coast of Volusia County. We have had the opportunity to acquire some of these rafts, and all five of our rafts are currently on display. They will eventually disintegrate, but our aim is to keep them on view as long as possible, using conservation and restoration methods.

The two oldest rafts in the collection are the "canvas" raft and the "inner tube" raft.  They made the journey from Cuba towards Florida before the era of wet foot, dry foot.  The canvas raft landed in Volusia county in 1989 and the inner tube raft in 1994, and their small size and fragile construction made it apparent that the occupants hoped and believed that they would be spotted by the Coast Guard, rescued, and brought to the  United  States. Collection notes indicate that the canvas raft had eight occupants! An orange Coast Guard life-preserver was attached to the raft, indicating that the occupants had been picked up and were safe. Some early photos of the inner tube raft show an orange life vest, but the collection documents make no mention of this raft being found with a Coast Guard life vest on board. 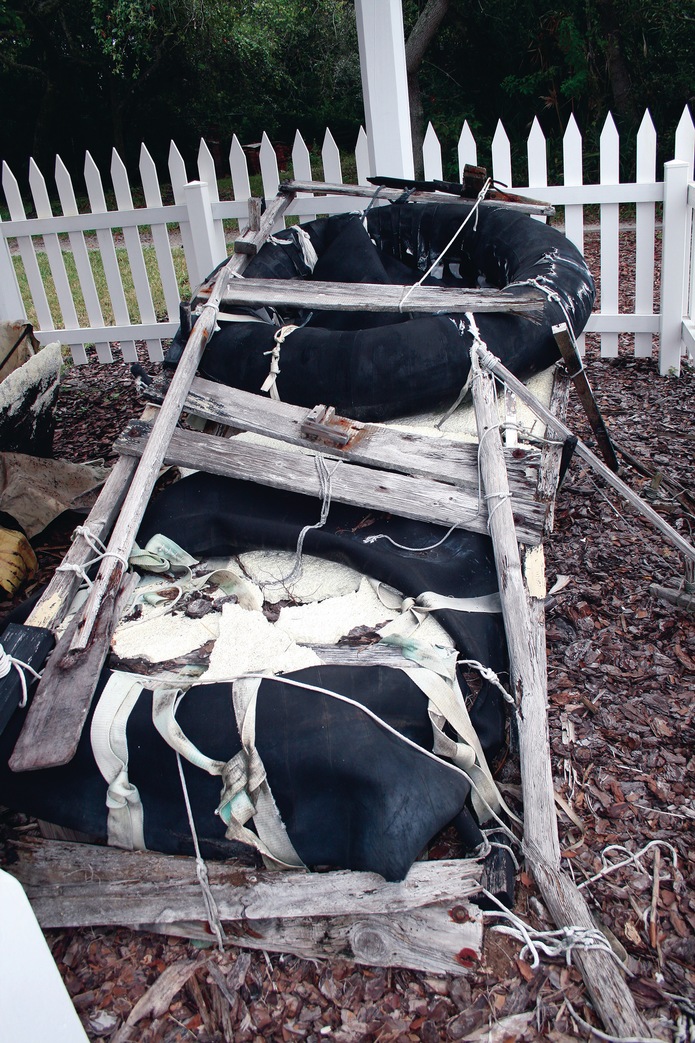 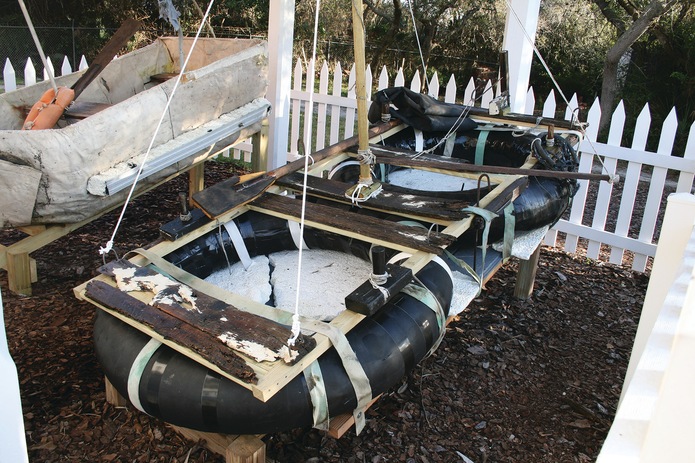 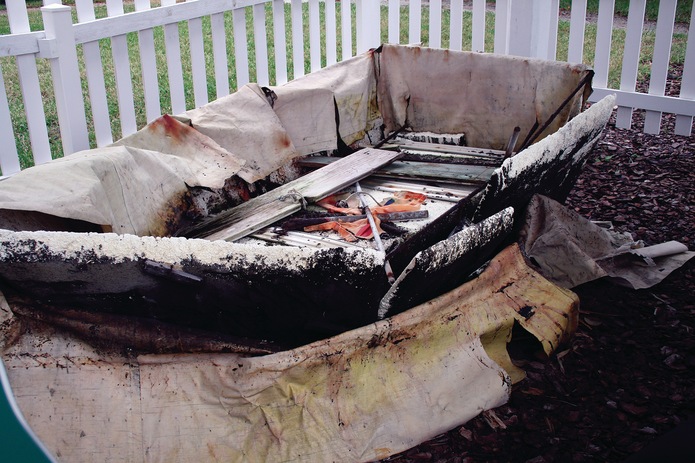 Three additional Cuban rafts were added to the museum’s collection between 2013 and 2016 including an ingeniously-designed craft name the Animal that features a shallow v-shaped hull and pointed bow, a catamaran, and a pontoon raft.

The Animal floated ashore in Ormond-by-the Sea on September 12, 2013. The empty raft had been spotted by the Coast Guard off Key West several months earlier and they tracked the raft as it drifted up the Florida coast. When the raft finally came ashore, a number of objects on board were quickly taken away by beach-goers, but the most significant object remains on the raft. A Chinese made Geely automobile engine (which had been sent first to the old Soviet Union) was used to power Animal. The engine was produced between 1987 and 1991 and is marked CCCP. The Volusia County Beach Safety Division collected the raft and agreed to donate it to our museum. Made long after the 1995 revision of the Cuban Adjustment Act, this raft was designed to bring refugees right to the coast of the USA. As long as they were able to get onto dry land, they would be allowed to stay and apply for citizenship. If they were picked up at sea by the Coast Guard, they would be returned to Cuba. 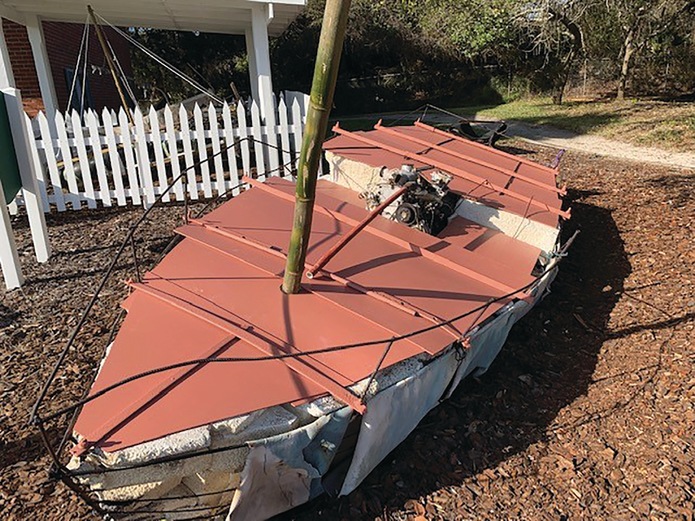 The catamaran-style raft came ashore in Wilbur-by-the-Sea on September 7, 2016. No motor or sails were found on the raft and it appeared to have been adrift for some time. The Coast Guard painted the large "OK" markings to let mariners know the raft had been observed and no passengers needed rescue. 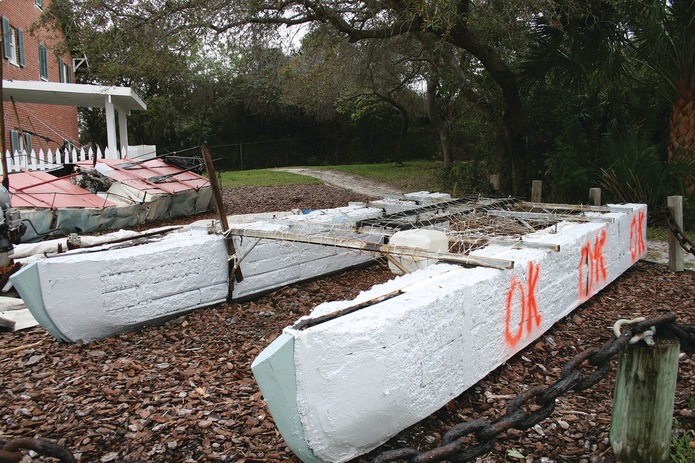 The third raft washed ashore in Daytona Beach Shores on November 1, 2015. It is a pontoon-style boat lovingly referred to as the “sandbag raft” by museum staff. This unique vessel is constructed from wooden pallets, scrap angle-iron, rebar, and long foam-filled tubes fashioned from hand-sewn tarpaulin material. Like the Animal, the sandbag raft is a propeller-driven craft powered by an old gasoline engine (possibly from a tractor) with an attached transmission. 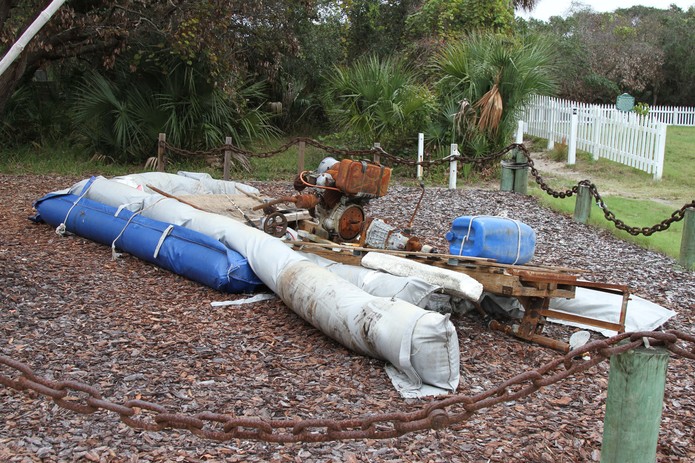 Both time and exposure to the extremes of the Florida climate have not been kind to these rafts. Canvas and rubber have hardened and cracked. Wood has rotted away and metal elements have rusted through. And Styrofoam, popular with raft builders for its flotation properties, has disintegrated into tiny bits. All of the rafts had unique problems, and the inner tube raft had become little more than a jumble of puzzle-pieces.

The Association is happy to announce the recent restoration of four of the five Cuban rafts currently on display at the Ponce Inlet Lighthouse and museum including the “canvas” raft, “inner-tube” raft, catamaran raft, and the Animal.  Restoration of the four rafts was completed by volunteer docents Mike Revak and Steve Welhoelter in collaboration with the museum’s curatorial department. The completion of this project will allow the museum to continue its interpretation of this important period in both Cuban and American history for many years to come. We invite you to visit the Ponce Inlet Lighthouse and Museum in the near future to see in person, the exceptional job completed by Mike and Steve.

Author’s Note: No plan current exists to restore “sandbag” raft at this time due its advanced state of deterioration and the manner in which it was constructed. Museum staff will keep you updated regarding the raft’s fate as it develops.