The Ponce de Leon Inlet Lighthouse has a long and interesting history. However, this fascinating chronicle extends far beyond the perimeter of the light station's white picket fence. It also encompasses the journey of every ship that has relied on the tower's brilliant beacon to navigate Florida's treacherous coastline, the crossing of every boat that has used it to safely traverse the unpredictable waters of Ponce Inlet, every life that has been saved by its beacon of hope, and the life story of every individual who considered the small fishing community that grew in its shadow home.

The Pacetti Hotel, located on South Peninsula Drive directly across from the lighthouse, played an important role in the development of both the light station and the Town of Ponce Inlet (formerly known as Pons Park) itself. Commonly referred to as the Pacetti House, Pacetti Hotel, or Pacetti Boarding House; the history of this nineteenth-century structure, the land it sits on, and the lives of those who built, lived in, and frequented it, is inexorably linked to that of the lighthouse, its keepers, and the families who once called the light station home.

The three-acre parcel on which the hotel rests was originally part of a 175-acre Spanish land grant given to Antonio Pons II in 1803. Antonio was a native Minorcan who immigrated to Florida in 1768 to participate in John Turnbull’s ill-fated New Smyrna Colony as an indentured servant. Released from servitude in 1777, Antonio moved to the north side of the inlet with his wife Beneta who was also of Minorcan descent. Antonio and Beneta build a home on the banks of the inlet and worked to improve their land until hostile natives force them to relocate to Fernandina some years later. Antonio was later killed fighting for Spain during the Patriot War of 1812. The Governor of East Florida José María Coppinger awarded Beneta ownership of the original 175 acres plus an additional 145 acres in restitution for her husband’s death in 1819. The original 175-acre land grant was inherited by her descendants Bartola and Gomecindo Pacetti when she passed away in 1858.

In the mid-1860s, Bartola Pacetti constructed a small two-room house for his wife Martha on the north bank of Mosquito Inlet. The idea to turn the small home into a hotel came from an itinerant artist named William Aiken Walker who often camped on the Pacetti's property. Walker reportedly urged Bartola and Martha to build a hotel that catered to the region's growing tourist trade, believing the rich fishing grounds less than a stone’s throw from the Pacetti’s front porch would draw sportsmen and tourists in great numbers.

The opportunity to construct the resort finally presented itself when the US Light-House Establishment offered to buy ten acres of land from the Pacetti family for a new light station at Mosquito Inlet. The Pacetti's sold the acreage to the US Government in 1883 for $400. From the sale of this land, Bartola and Martha Pacetti were able to complete the construction of the Pacetti Hotel. In February, a small work party arrived to begin the construction of the new lighthouse facility. Some of these workers possibly slept in the recently completed hotel, at least until bunkhouses could be built nearby.

Although the $400 earned from the sale of the ten acres proved to be a financial windfall for the Pacetti family, the transaction was not without negative consequences. Bartola and Martha's son Henry is seriously injured while working as a laborer for the lighthouse construction crew. While moving building materials from the river bank to the work site, a load of bricks fell, pulling on a rope that got tangled around the young man’s leg. The damage was severe and doctors were forced to amputate the limb. Complications from the procedure eventually cost Henry his life in 1886. Bartola followed his son to the grave in 1898.

the wonderful fishing opportunities afforded by the nearby waterways and Mrs. Pacetti’s hospitality spread. By 1900, the hotel had grown to include numerous guest bedrooms, a large kitchen, a parlor, a dining hall, and a sweeping front porch that afforded visitors an unobstructed view of Ponce Inlet and the Halifax and Indian Rivers. Travelers and outdoor enthusiasts from across the country flocked to the world-famous fishing resort, attracted not only by glowing reports of the establishment's knowledgeable fishing guides, but Martha's reputation as an excellent cook as well.

Martha Pacetti eventually passed away in 1917. Following her death, the popularity of the Pacetti Hotel steadily declined, and the hotel slowly fell into a state of disrepair. Olivia Gamble, daughter of James Gamble, purchased the derelict property in 1936 in memory of her father who loved to visit the Ponce Inlet area. Olivia is credited with saving the historic structure by financing extensive repairs to the hotel that she later used as a guest house for her family and friends.

Cincinnati socialites Carl Louis Nippert and his wife Louise inherited the Pacetti property from Olivia Gamble after her death in 1961. Heirs to the Gamble fortune, the Nipperts frequented the Pacetti Hotel on many occasions and were considered warm, welcoming, and well-respected members of the local Ponce Inlet community. In addition to inviting friends to visit the hotel for dinner parties and relaxing stays, the couple also opened their doors to the entire roster of their professional baseball team, the Cincinnati Reds. Town residents were amazed by the parade of famous ballplayers strolling along the quiet tree-lined streets of their seaside community at the end of the team’s annual spring training.

The Preservation Association's first Executive Director and founding member Ann Caneer served as the property's caretaker from 1970 until 2010. Ownership of the Pacetti Hotel was transferred to the Greenacres Foundation shortly after Louise Nippert's death on July 23, 2012. The property remained vacant for the next seven years.

In September 2019, the Ponce De Leon Inlet Lighthouse Preservation Association was provided the long-awaited opportunity to acquire the historic hotel from the Green Acres foundation. The Association's Board of Trustees viewed the purchase of the Pacetti Hotel as a rare once-in-a-lifetime opportunity. The acquisition of this cultural site will not only save one of Volusia County's most endangered historic places but significantly enhance the museum's ability to interpret the Ponce de Leon Inlet Light Station in more meaningful detail. The closing date for this real estate transaction is October 7, 2019. 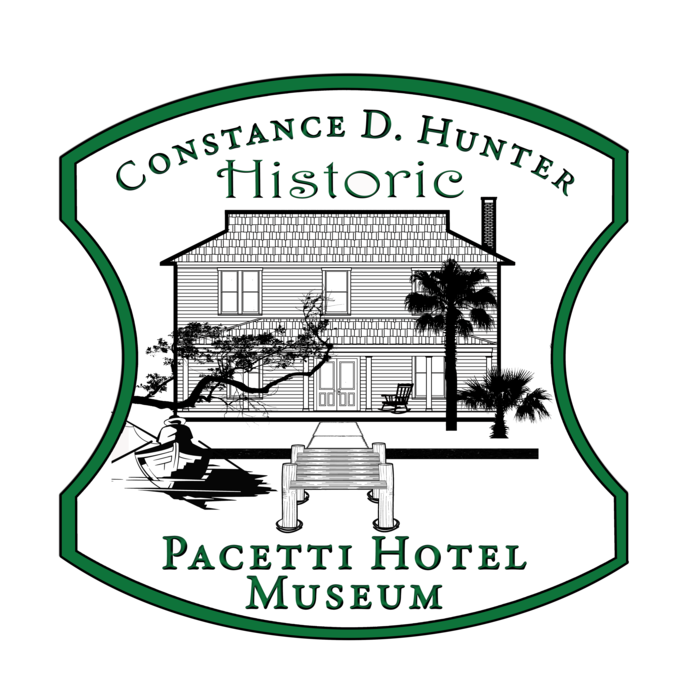 The Ponce De Leon Inlet Lighthouse Preservation Association launched an ambitious 3-4 year project to restore, preserve, rehabilitate, and develop the Pacetti Hotel into a public museum shortly after purchasing the property. The Association is aided in this endeavor by the Paul B. Hunter and Constance D. Hunter Charitable Foundation which entered into an agreement with the Association to help fund the project with a generous 1.5 million dollar grant in exchange for naming rights for the museum in honor of its founder Constance D. Hunter. Now entering its contractor selection and construction phase, the anticipated completion date for the Pacetti Hotel Development Project and grand opening of the Constance D. Hunter Historic Pacetti Hotel Museum is scheduled near or at the end of the Association’s 2022-2023 fiscal year.

For the past year or so, a steady stream of artifacts and antique furniture has been donated to our Preservation Association for use at the Pacetti Hotel Museum when it finally opens to the public. Members and readers and friends-of-a-friend from all over the state have donated to this ambitious project. So far, we have received beds, chairs, tables, sofas, display cases, dressers, wash stands, steamer trunks, a piano, porcelain dishes, glassware, candleholders, and more. The curatorial department is currently in the process of cataloging, cleaning, and stabilizing these artifacts and incorporating them into the Constance D. Hunter Historic Pacetti Hotel Museum's final exhibit plan.

As many of you can imagine, the process of transforming a historic property like the Pacetti Hotel into a public museum can be an arduous process. Professional consultants must be hired, inspections and structural assessments completed, and comprehensive development plans created- all while protecting the historic integrity of the property itself. These development plans must then be reviewed by a municipality's respective departments and revised as needed before they are accepted,  forwarded to various municipal boards for additional review, and ultimately sent to the Town Council for final approval. Only then can the final construction documents be printed and the project sent out for contractor bidding. These initial steps can take months or even years to complete.

The Preservation Association is pleased to announce the successful completion of the departmental review and acceptance phase of the project plan approval process and the recent review and acceptance of the final development plans by the Cultural Services Board. These important milestones paved the way for the final steps in the Town's approval process- review and recommendation by the Town's Planning Board followed by final approval from the Town Council. The Association has recently completed this important stage of the Pacetti Hotel Restoration, Preservation, Rehabilitation, and Development Project and have now begun the next phase of the project- permitting and contractor bidding and selection.

As we all know, the cost of living and doing business has risen considerably over the past couple of years due to inflation and the scarcity of building materials.  Individuals and organizations that are interested in helping support the Historic Pacetti Hotel Project through the donation of funds, in-kind services, or artifacts are encouraged to contact Executive Director Ed Gunn via email at edgunn@ponceinlet.org or by phone at (386) 761-1821 ext. 15. Together we can make the Constance D. Hunter Historic Pacetti Hotel Museum a reality.

In addition to an already generous grant, the Paul B. Hunter and Constance D. Hunter Charitable Foundation has pledged to match all third-party donations in support of the Pacetti Hotel up to a combined value of $250,000. This offer is a wonderful opportunity for anyone looking to maximize the funding potential of their charitable contribution. Any donations made to the Preservation Association for the purpose of restoring the Pacetti Hotel will be matched one hundred percent by the Foundation, effectively doubling the value of your overall gift. Thank you for your support.