The Ponce de Leon Inlet Lighthouse began as the Mosquito Inlet Lighthouse with the purchase of ten acres of land on March 21, 1883. The lighthouse tower design was based on Light-House Board standard plans with modifications made for the specific site. The lantern room was based on the design used at Florida's Fowey Rocks Lighthouse. Tragically, Chief Engineer Orville E. Babcock and three others drowned in the inlet when construction began in 1884. Despite this setback, the tower was completed three years later in 1887. 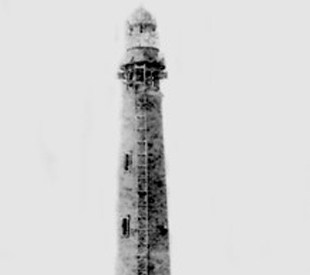 The kerosene lamp in the first order fixed Fresnel lens (made by Barbier et Fenestre in Paris in 1867) was first lit on November 1, 1887, by Keeper William Rowlinski. The new light could be seen 20 miles to sea.

Rowlinski, a Russian immigrant, served until 1893 when he transferred to a lighthouse in South Carolina. When he retired in 1902, he purchased a house on the Halifax River right next to his old lighthouse at Mosquito Inlet. Rowlinski was succeeded as principal keeper by Thomas Patrick O'Hagan, a staunch Irish Catholic, who moved to the light station with his wife and four children. O'Hagan would have seven more children before moving on to the Amelia Island Light Station in 1905.

In 1897, during Keeper O'Hagan's tenure, author Stephen Crane was shipwrecked off shore. Crane was aboard the Commodore, a gun-running steam tug that was carrying munitions and supplies to aid Cubans who were rebelling against Spanish rule of their island. The Commodore sank about 13 miles off the Florida coast. The only thing visible to the survivors was the lighthouse beacon at Mosquito Inlet. Stephen Crane was traveling as an undercover correspondent for the New York Post which published his account of the sinking. This newspaper report formed the basis of Crane's famous short story, "The Open Boat." 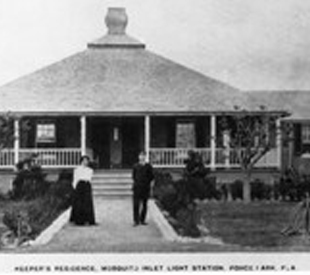 John Lindquist a Swede, became principal keeper in 1905 and served here until 1924. In 1907 a new well was dug and a windmill with a water tank tower was built to provide a more reliable water supply. The windmill never worked properly and was removed in 1914. A new cedar water tank was installed on the windmill tower. A small pump house was added to house a gasoline powered water pump. In 1909, the kerosene lamp in the tower was replaced by an incandescent oil vapor (IOV) lamp.

The 1920's were a period of great change at the Mosquito Inlet Lighthouse. The Lighthouse Service added bathrooms and indoor plumbing to all the keepers' dwellings in 1921. In 1923, under Principal Keeper Charles Leslie Sisson, a new generator was installed in the pump house and electricity was brought into the keepers' homes for the first time. In 1927, the name of Mosquito Inlet was officially changed to Ponce de Leon Inlet for real estate and tourism purposes. The Lighthouse Service agreed to change the name of the light station to match that of the inlet. 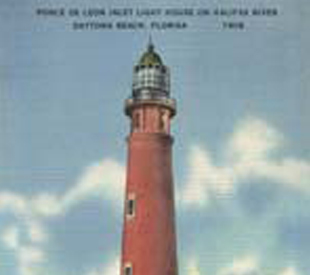 John Belton Butler became principal keeper in 1926, and in August, 1933, the tower light was electrified with a 500 watt electric lamp. At the same time, the original first order fixed lens was replaced by a third-order revolving, flashing lens. The positions of the assistant keepers were abolished, but a "relief keeper" was stationed here to lend a hand. After Edward Lockwood Meyer became principal keeper in 1937, a radio beacon was established in the first assistant keeper's dwelling on the south side of the light station.

In 1939, the lighthouse was transferred from the abolished Lighthouse Service to the Coast Guard, and Edward Lockwood Meyer, the last civilian keeper at this station, joined the Coast Guard. During World War II, the keepers' families left the light station, and the buildings were turned into barracks for the Coast Guardsmen who maintained the radio beacon, the light in the tower, and stood watch against enemy submarines and aircraft.

After the war, families moved back, but by 1953, the lighthouse was completely automated and the keepers and their families left for the last time. In 1970, the Coast Guard abandoned the old light station and established a new light at the Coast Guard station on the south side of the inlet. Vandals did much damage to the light station, but two years later as the result of work by concerned citizens, the abandoned property was deeded to the Town of Ponce Inlet.

In 1972, the Ponce de Leon Inlet Lighthouse Preservation Association was founded as a non-profit organization to restore and operate the property as a museum. In 1972, the light station was listed on the National Register of Historic Places as one of only a handful of 19th century light stations to have all its original buildings still intact. 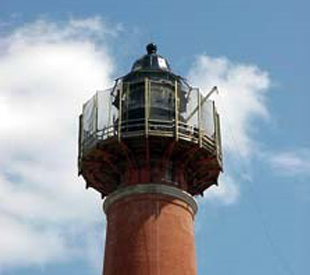 Through the efforts of the dedicated volunteers of the Preservation Association, the damage done by vandals was reversed and full restoration was begun. Preservation Association volunteers also began to revive the lost arts of classical Fresnel lens repair and restoration, establishing a reputation for their skills that was soon recognized by the Coast Guard. In 1982, a new tower balcony replaced the crumbling one, and the light in the lantern was restored to active service. The three keepers' dwellings now house exhibits on many aspects of lighthouse history. In 1998 the Light Station was designated a National Historic Landmark.

In 1995, the first order lens from the Cape Canaveral lighthouse was restored and placed on display in the new Ayres Davies Lens Exhibit Building. The original first order lens from the Ponce Inlet Lighthouse was restored and put on display in 2003. In April 2004, restoration work on the third order Fresnel lens was completed and this rotating lens was returned to the lantern room at the top of the tower. The Ponce de Leon Inlet Lighthouse is now listed as an operational private aid to navigation.

Over the years, the Preservation Association has continued to maintain and conserve the site, add to the world-class collection of lighthouse artifacts, construct additional buildings, and provide free educational programming to its community.