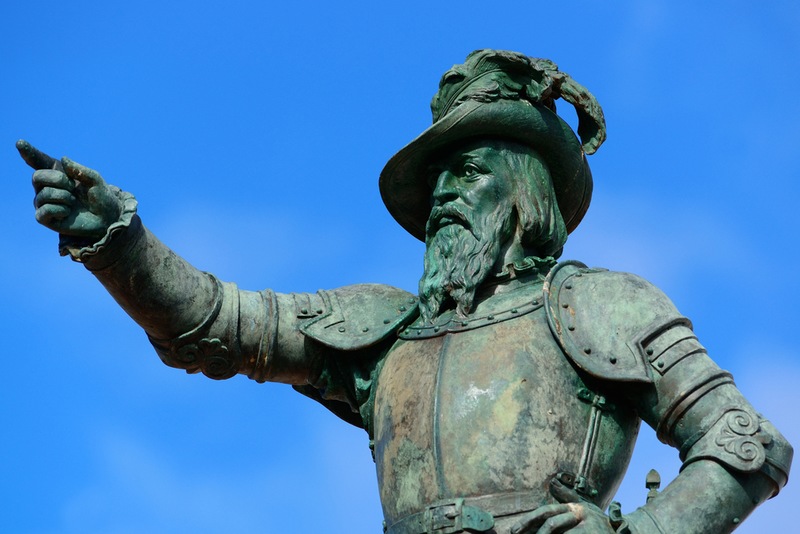 Ponce de León is believed by many to be the first European to land in Florida, which is where our beautiful inlet gets its name. However, Florida was hardly the first stop on the Spaniard’s famous expeditions. He garnered much of his fame and reputation by settling what would become modern-day Haiti and the Dominican Republic, as well as finding gold in nearby Puerto Rio before being encouraged by the Spanish crown to search for more land elsewhere. Hearing tales of a magical fountain of youth, Ponce de León set out for a fabled island known by natives as Bimini in search of the fountain, as well as more land and gold for the Spanish empire. What followed was the finding and settling of Florida as we know it today.

Ponce de León was born into a noble Spanish family in 1460 and though they were poor, he was able to acquire many valuable social skills and military tactics by serving as a page at the court in Aragon and fighting against the Moors in Granada. He acquired a taste for fame and fortune and accompanied Christopher Columbus on his second expedition to the West Indies in 1493. Roughly a decade later, Ponce de León played an instrumental role in the subjugation of Hispaniola's (modern-day Haiti and the Dominican Republic) native population and named the provincial governor of the eastern part of Hispaniola by the King of Spain as a reward for his efforts.

Ponce de León was later ordered to explore the nearby island of Peurto Rico and verify reports that an abundance of gold could be found there. He took a single ship and 50 soldiers to the area and landed near the modern-day capital of San Juan. The small band of Spanish soldiers conquered the island's inhabitants under Ponce de León's leadership and soon discovered that the rumors of gold were true. Using the island's conquered people as slave labor, the Spanish mined vast quantities of gold from the mountains of Peurto Rico. Ponce de León returned to Hispaniola following this success and was awarded the title of Governor of Puerto Rico in 1509. De Leon would only hold this title for a few years before the son of Christopher Columbus wrested it away from him within the Spanish courts. Forced to rescind De Leon's position as Governor of Puerto Rico, the Spanish Crown encouraged Ponce de León to search for new territories to conquer outside of the Columbus family's sphere of control.

In his continuous search for more land and profits for the Spanish empire, Ponce de León heard tales from the natives of the Caribbean that there existed a magical fountain with waters that would grant eternal life. He set out to find this mythical place and scoured the Bahamas, as well as the island of Bimini, but could not find the fountain nor gold.

In April of 1513, Ponce de León and his ships landed on the eastern coast of modern-day Florida. De Leon initially believed he had discovered a large island but later learned it something more. Due to the landscape’s lush vegetation and the Catholic holiday Pascua Florida (Feast of Flowers) during which it was "discovered," Ponce de León named the region La Florida. He continued sailing south along Florida's east coast before turning west through the Straits of Florida, past the Florida Keys, and then north along the peninsula's west coast. Ponce de Leon landed in numerous locations during this journey and encountered many Native American inhabitants along the way. Some of the indigenous were friendly towards the Spanish but many were not including the Calusa who inhabited much of south Florida and greeted the European explorers with much violence. Ponce de Leon returned to  Puerto Rico after exploring the Florida coast and was awarded the title of Governor of Bimini and Florida by the Spanish Crown, with permission to colonize those regions as well.

Return to Florida and Legacy

After cementing his personal finances and claims in Spain, Ponce de León returned to the west coast of Florida in 1521 for his second exploration of the land. His expedition was very quickly attacked by the Calusa tribe again and De León was struck by an arrow through the thigh. He and all his men sailed to Cuba where he succumbed to his injury and passed away.

Due to Ponce de León’s efforts, Spanish colonization was able to advance quickly through the Caribbean. Though no record exists in his notes of deliberately looking for the fountain of youth, it will always be attached to him as the object he was searching for. Furthermore, the name he gave to our state has stuck for hundreds of years and his name lives on every day in Ponce Inlet.