Discover the Origins of Flag Day 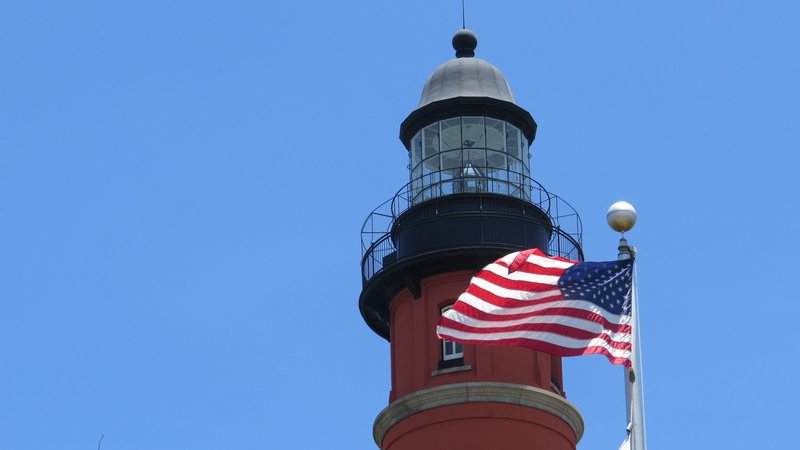 Have you ever wondered about the origins of Flag Day? You may have noticed it featured on your calendar as an annual holiday or heard about it in school, but how did it begin? Read on to discover the origins of the unique holiday, the meaning behind celebrating it today, and how you can spend Flag Day 2021 at the lighthouse!

What is Flag Day?

Flag Day is traditionally celebrated on June 14th each year to commemorate the adoption of the flag of the United States. It was made an official holiday in 1916 by President Woodrow Wilson. So, you may be wondering why June 14th? In order to explain the origins of the date chosen, we must go a little farther back in time…

The Origins of the American Flag

The American Revolution began in the year 1775 when tensions between residents of Great Britain’s 13 North American colonies and the British Crown’s colonial government rose to an all-time high.

At the time, colonists were not yet unified and did not fight under a single flag. In fact, many groups of independence-seeking colonists fought the war under their own flags. Then, in June of 1775, the Second Continental Congress formed the Continental Army to unify the colonists into one army against the British.

With the creation of the Continental Army, the first “American” flag was introduced. This flag was designed with 13 red and white stripes to represent the 13, now unified, North American colonies and a Union Jack featured in the corner, a symbol of the United Kingdom.

For many of the colonists, this flag design too closely resembled that of their British enemy. Commander in Chief and soon-to-be first U.S. President, George Washington, agreed that the flag was not unique enough to represent the revolutionary efforts of the Continental Army. He then initiated the creation of a new symbol to represent the colonists’ efforts towards freedom.

Two years after the creation of the Continental Army, the Second Continental Congress met again on June 14th. In the midst of writing the Articles of Confederation, the first written Constitution of the United States, Congress passed a new resolution. This resolution stated that “the flag of the United States be 13 stripes, alternate red and white,” and that “the union be 13 stars, white in blue field, representing a new constellation.” Thus, the American flag was born!

June 14th would later be chosen as the designated day to celebrate the American stars & stripes, but it wouldn’t become an official holiday until many years later….

The Creation of Flag Day

The original idea of celebrating Flag Day on June 14th came from a Wisconsin school teacher, Bernard Cigrand. In 1885, he had his school observe the holiday formally for the first time.

However, Flag Day would not become a national holiday until 1916 when President Woodrow Wilson declared the anniversary of the flag’s creation on June 14th as Flag Day.

As you revel in American pride on this historic holiday, come visit the Lighthouse for unique Florida maritime history and engaging workshops about another type of flag that hits close to home in coastal Ponce Inlet – semaphore flags!

Join us on Sunday, June 13th from 10:30 am to 2:30 pm to celebrate Flag Day at the Ponce de Leon Inlet Lighthouse. Engage in family-oriented workshops and activities included with your regular admission.

Activities will include learning how to communicate with Semaphore flags, used to signal information from a distance. Kids can enjoy a special arts-and-crafts workshop where they can make their very own lighthouse Semaphore flag to take home. You won’t want to miss this unique educational & fun-filled experience. Hope to see you there!