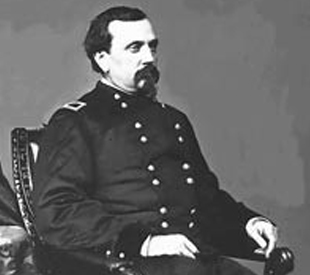 Orville E. Babcock was born on Christmas Day in 1835, in Franklin, Vermont, a small in town near the Canadian border and close to Lake Champlain. In 1861, Babcock graduated from West Point and, during the Civil War, rose from second-lieutenant to brevet brigadier-general. He earned many battlefield honors and became aid-de-camp to General Ulysses S. Grant. Babcock delivered Grant's final surrender summons to Lee and escorted the famous Confederate general to his meeting with Grant at Appomattox Courthouse, an event which Babcock saw.

After the war, Babcock served Grant as private secretary and married Annie Eliza Campbell in Galena, Illinois. Babcock followed President Grant to Washington where he became superintendent of buildings and grounds for the City of Washington. Soon, however, Babcock left the city to become chief engineer of the Sixth District of the Light-House Establishment. As part of this job, Babcock was responsible for the planning and building of the Mosquito Inlet Lighthouse. Unfortunately, before Babcock could begin the actual construction, the boat bringing him to shore from a schooner overturned in the inlet, and Babcock drowned on June 2, 1884. His body was returned to Washington, DC, for burial.